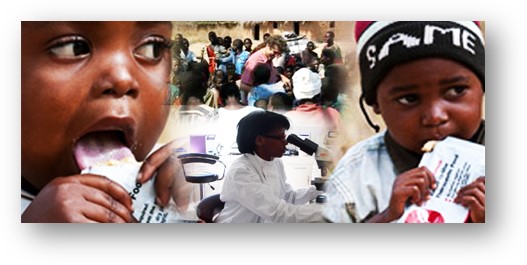 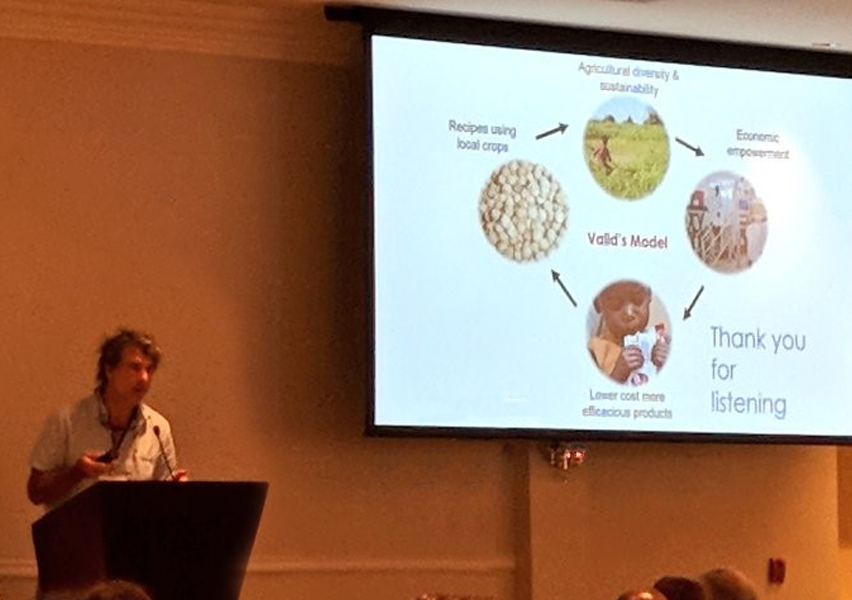 A positive catalyst for change

I very much welcome the USD$250 million contribution announced by Administrator,Samantha Power of USAID, and associates towards the purchase of Ready-to-Use Therapeutic Food (RUTF) in mid-July 2022. This funding, coupled with additional pledges of USD$280 million following the meeting of the UN’s General Assembly in New York in September, means that UNICEF now has more than double the funding to purchase RUTF than ever before. However, and despite this timely donor intervention, current manufacturers are apparently now unable to supply at sufficient scale and pace to meet this increased “donor” demand. This shortcoming in RUTF availability highlights the consequences of a system based on a very restricted range of RUTF recipes and a malfunctioning market that puts supply considerations and agencies interests ahead of consumers. The result is high cost RUTF, limited competition, no innovation, sparse manufacturing in Africa, and no choice of product.

This shortcoming in the RUTF market is symptomatic of wider problems in the humanitarian system as a whole. After working in humanitarianism for over 35 years, I have sadly arrived at the conclusion that many of the UN organisations and large NGOs are more focused on controlling resources and maximising income streams and profile rather than achieving actual impact to help those they purport to serve. I am not suggesting that this applies to most of the individuals working in humanitarianism and I know that within the system there are very many highly motivated and capable people. However, and sadly, the system is far less than the sum of its parts. I believe that this critical failing is largely due to a major cultural problem at the heart of humanitarianism and development. I have articulated this in the following article here.

At the core of the problem is a profound misconception of the aid and development industry. Too many of those involved frequently misconceive the industry as something primarily benevolent; the ‘charity sector’ supplying ‘aid’ to
‘beneficiaries’ – and they fund it by selling this misconception to the public and hence to politicians. The facts are, however, quite different. Those suffering from severe acute malnutrition have rights enshrined in international law that we have a duty to fulfil. They are not passive recipients of our benevolence but active clients who must juggle multiple priorities, constraints, and opportunities. This misconception of humanitarian aid as charity is profoundly damaging because it focuses attention on the humanitarian actors and funders, on their motives and strategies, rather than the needs, rights, and realities of their clients – in this case, those suffering from severe acute malnutrition. The results are a supply-side,central-planning mentality at the industry’s core and a funding plus renumeration system related to the control of resources – rather than to outcomes and impact. In this culture, those at the centre receive large remuneration, while those who deliver products and services to our clients on the front-line, receive little – and are often expected to work as volunteers. It incentivises excessive investment in agency profile whilst discouraging accountability on outcomes and openness to change. It sees profit as distasteful, precluding meaningful and sustainable engagement with the private sector and restricting the scope for product and systems innovation.
The issue with the WHO effectively blocking VALID Nutrition’s lower cost, more effective, plant-based, ready-to-use therapeutic food (RUTF) is a good example of how the system is failing to improve the treatment and prevention of severe acute malnutrition. In this case, lower cost RUTF recipes that can be made in countries affected by malnutrition out of locally grown ingredients by actors outside the humanitarian system, are seen as a threat. The data shows that the amino acid enhanced, plant-based RUTF is equivalent to the milk-based product in terms of the primary indicators of recovery rates, mortality rates and default rates and superior to the milk-based product in terms of coverage / cost – the other primary indicator and the treatment of iron deficiency and anaemia. Furthermore, the climate impact of this new recipe compared to the milk and peanut based standard is far lower.

The potency and potential of RUTF as the solution to child wasting is seemingly only now being understood. There is ample evidence that effective, well-functioning markets are driven by demand and place customer considerations first and foremost. There is no reason why it should be any different with RUTF. The sad fact however is that after 15 years of community-based management of acute malnutrition (CMAM), when adjusted for currency exchange rates, the cost of RUTF has not decreased – even before the latest increases caused by the current global disruption. This has occurred despite massively increased volumes being used and the resultant huge potential economies of scale available. I cannot think of any other product where the transition from cottage industry into a global commodity has not resulted in a substantial decrease in price. Furthermore, at least 40% is still being supplied from Europe or the USA thus adding to transport cost and forgoing more sustainable development opportunities directly within countries affected by malnutrition. Typically, reports state that less than 25% of starving children who need treatment (with RUTF) receive it. In reality, the actual figure is very much lower, because UNICEF base their calculation of the number of children with severe acute malnutrition on prevalence (the numbers of cases at any one time) rather than incidence, the actual number of cases that occur during any given year. For an acute condition, the use of prevalence is unscientific and highly misleading as it underestimates the total number of annual cases – in the case of severe acute malnutrition by 2 to 4 times, meaning that true coverage rates are around 10%. The use of this misleading statistic is an example of how humanitarian agencies act in ways that benefit their own profiles rather than truly reflecting the needs of the children requiring treatment. It sometimes seems that UNICEF and NGOs regard their donors as their “customers” and behave accordingly – when in reality the real customers are of course, starving children.

As everyone acknowledges, the single biggest barrier to increasing coverage is the cost and availability of RUTF. The gravity of the current global food security situation, coupled with the pandemic driven disruption to developing country economies and logistic systems, has exacerbated an already appalling situation. However, this latest humanitarian crisis provides the opportunity to change this dysfunctional landscape and to finally act in the best interests of consumers – those who need RUTF to survive. The “intervention” led by Administrator Power, with the sheer scale of RUTF funding raised, exposes the supply limitation in the current RUTF market. This makes it clear that we cannot continue in the same way but instead must open the market to a wider range of products and suppliers.

The much lower cost, amino-acid enhanced, plant- based, Soya-Maize-Sorghum RUTF that already has compelling efficacy data supporting its use, should be used at scale, and new larger scale manufacturers should be incentivised to enter the market. Not only will this treat more starving children at a lower cost, but it will also provide the opportunity to generate data that I am sure will facilitate opening up the market to more competition. There is now a major opportunity to change the system to use donors funds for RUTF more cost effectively and in a way that strengthens local economies and improves resilience. 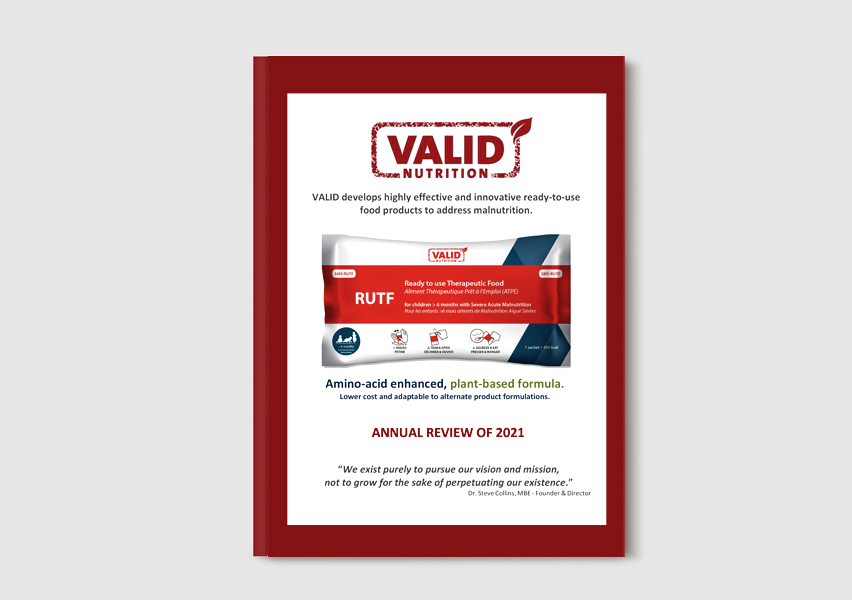 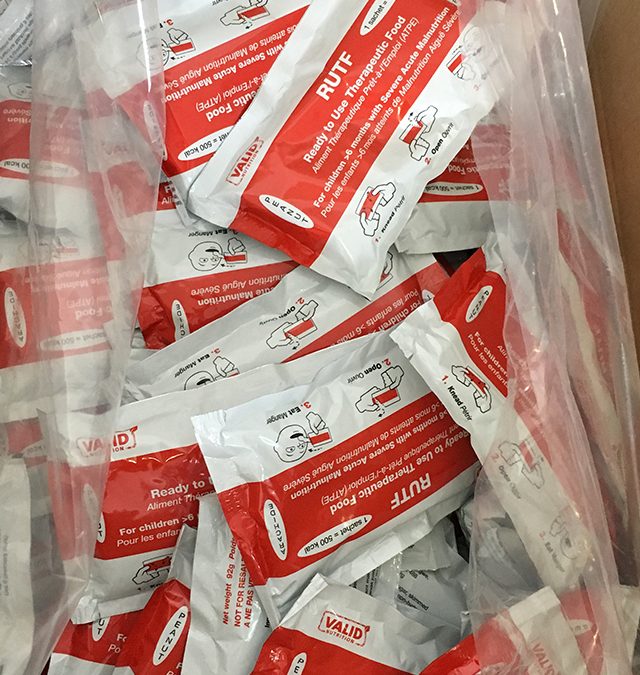 VALID Nutrition is sadly no longer involved in RUTF manufacture.

VALID Nutrition is no longer involved in RUTF manufacture. Attached is a statement regarding the closure of our Malawi operation. The VALID charity remains committed to reforming the RUTF market through evidence-based innovation and research, rather than as a manufacturer. 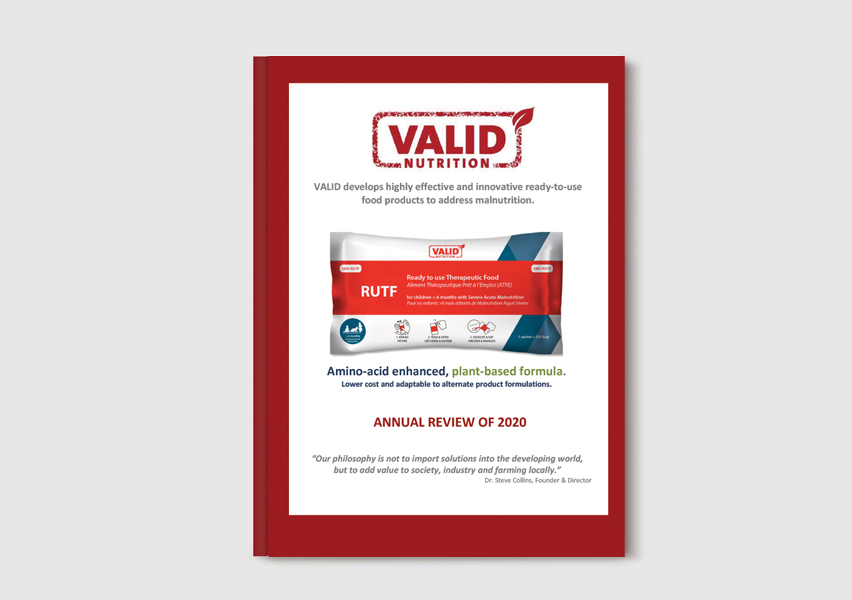